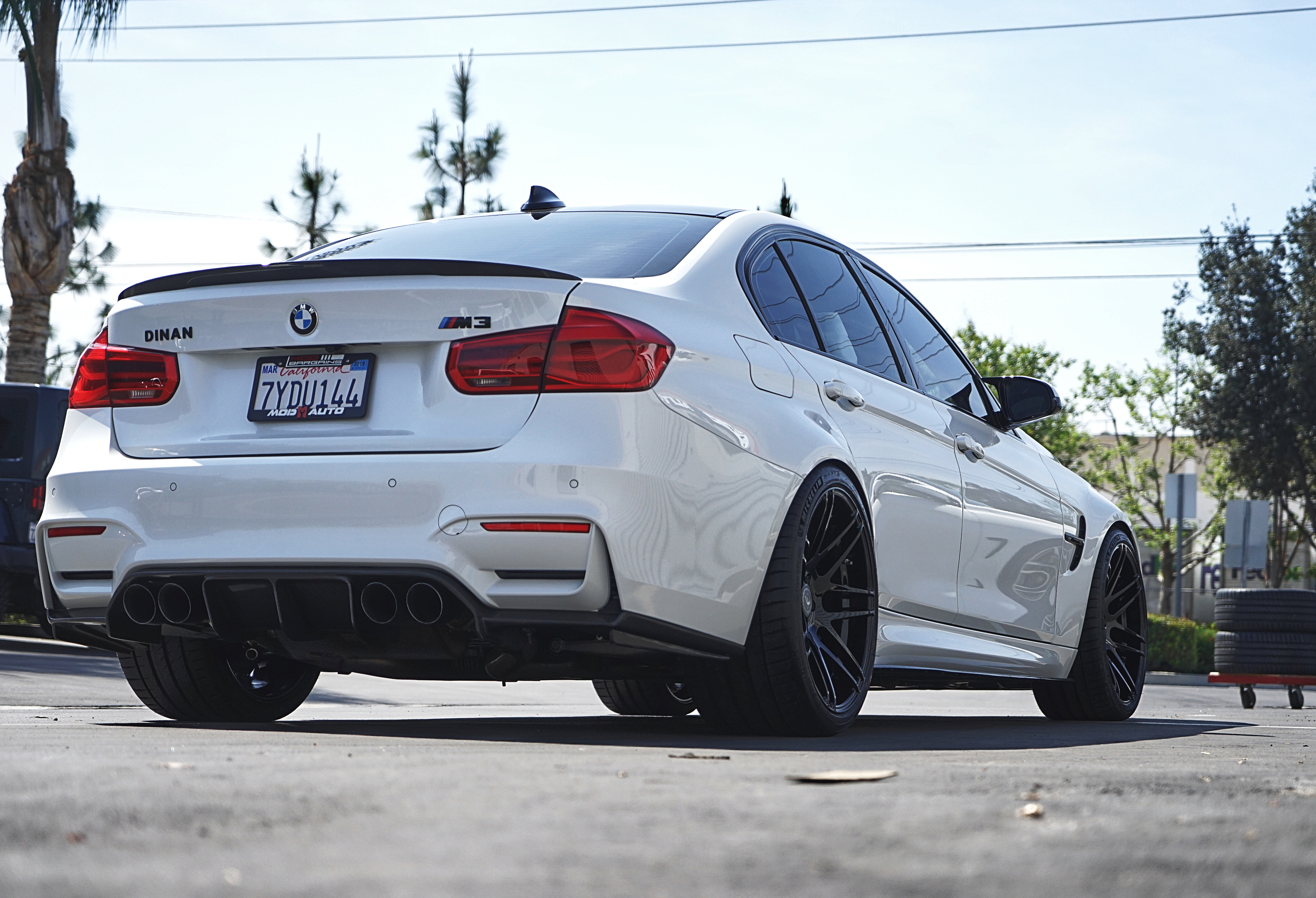 The F80 M3 is an all around great car with its stunning looks and power. This M3 really does stay true to its history of being an enthusiast car, which means this car is bound to have large aftermarket support. It’s up to you how you want modify your car. Whether you decide to go performance oriented or maybe more of a show look, there are a ton of options. You can even go for a balanced route which is the direction Gilbert went with his very own M3. A mixture of performance and class, this M3 is loaded with a bunch of aftermarket goodies.

Starting with the exterior of this car the first thing that you most likely noticed are the Super Deep Concave Forgestar F14’s (Front 20×9.5 Rear 20×11) complimented with Michelin Pilot Sport 4S tires (Front 265/30/20 Rear 295/30/20). This wheel and tire setup allows for an aggressive and grippy stance. At the front of the car you’ll find a subtle but sleek Carbon Fiber V1 Style front lip which completes the look of the front bumper. Also on the front bumper he replaced the factory side markers with Alpine White painted reflectors, ditching the ugly oem amber reflectors. Toward the center of the car you can spot the Carbon Fiber Side Skirt Extensions, these side skirts add a bit of flair to the car while making the side profile of the car more pronounced. Finally around back you’ll find a OEM BMW Performance trunk spoiler and a Carbon Fiber V3 diffuser, both of these work in tandem to help with downforce and reduce drag on the car to keep it planted around the corners. Also don’t forget DINAN badge just for that extra bit of clout.

Sliding into the driver seat of this beast you’d be pleased to find subtle and classy touches added to the interior as well. In the center console you’ll notice the Carbon Fiber Alcantara Shift Console Trim accompanied nicely with a Carbon Fiber Gear Selector. It’s little details like these that stand out from the norm and really make the car feel unique.  Along with those Gilbert also has the P3 Integrated Vent Gauge instead of a typical aftermarket cylindrical type gauge. This is a must have on tuned M3’s to be able to quickly view whats going on with your car and help keep your peace of mind. Lastly to top off the interior mods are the Dinan Pedal Cover Set.

Now for the fun part, the performance mods. Starting with the Injen Evo Cold Air Intake for extra air flow, paired with Evolution Racewerks Black Charge Pipes for better throttle response and decreased turbo lag. These two alone really help bring the car to life and make a noticeable difference. For cooling Gilbert had the Dinan Heat Exchanger installed so that he could run more power without worry of the car over heating. On the exhaust side of things he’s running a AWE Non-Resonated Switch Path with Diamond Black 120mm tips and a CG Precision Valve Controller to give the ability to control the volume of the exhaust. Last but not least the car has a Dinan Dinantronics stage 3 tuner ( Dinan heat exchanger required ) on it to liven it up and give it an overwhelming amount of horse power and torque.

One of most important things to keep in mind when modifying your car is the suspension, suspension is whats going to be able to let you put down all your power and have more control of the vehicle. Gilbert has a good amount of suspension done to his M3. First would be the Dinan Performance Adjustable Coil Over Suspension System, the Dinan Anti-Roll Bar Set and to top it all off he has the Dinan Tension Strut Ball Joint Kit. All of these components work in perfect harmony with one another to not only give the car an aggressive stance but also keep the car balanced and planted to the road.

If you like Gilbert’s build and want to know what kind of cool stuff you could to with your own car (whether it’s an M3 or not) then make sure you get in touch with our Mod Experts. They can be reached at (714)582-3330 or by email at Sales@ModBargains.com. If you like Gilbert’s build be sure to ask for Kevin, he is the Mod Expert who helped Gilbert piece everything together. He can be reached directly at (714)582-3330 x8003 or by email at Kevin@ModBargains.com.